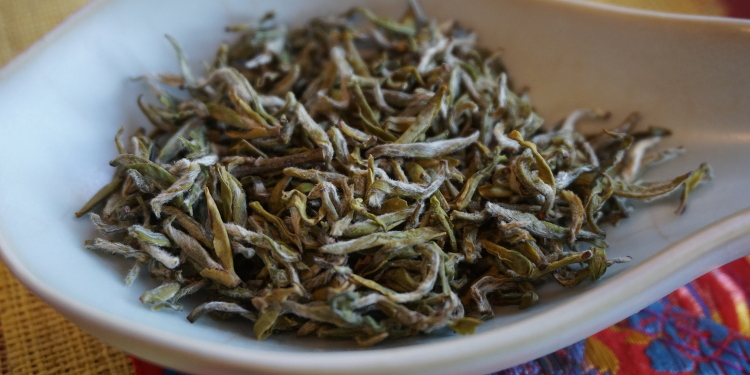 Mengding Ganlu (蒙顶甘露) is a famous green tea variety produced on and around Mengding Mountain in Sichuan Province. It is a pan-roasted green tea. Its name means “Mengding Sweet Dew”. It is considered one of China’s ten most famous teas.

Mengding Mountain is situated on the southwestern border of the Sichuan basin, on the territory of Ya’an City. The name Mengding Mountain means “Peak of Meng Mountains”. This most well-known peak of what used to be called the Meng Mountains has given the tea part of its name. It is especially renowned for its misty climate. The production area comprises the whole range of neighbouring mountains.

The region around Mengding Mountain is one of the very earliest place where tea plants were cultivated intentionally (as early as Han Dynasty) . It is also there, that kneaded green tea was produced for the first time. The name Ganlu or “Sweet Dew” has two possible interpretations. It can be explained as a description of the appearance and taste of this fine and delicate tea. Ganlu was also the surname of the daoist master Wulizhen (吴理真), who is said to be the one who planted the first seven bushes of tea on Mengding Mountain. During the Song Dynasty, these bushes were enclosed and named Imperial Tea Garden (皇茶园).

These are the production steps necessary for making Mengding Ganlu:

Processed dry leaves of Mengding Sweet Dew are small, thin, and curly. They are light green in colour, with some whiteness.

Sweet Dew’s taste is smooth and refreshing, with a light sweetness.