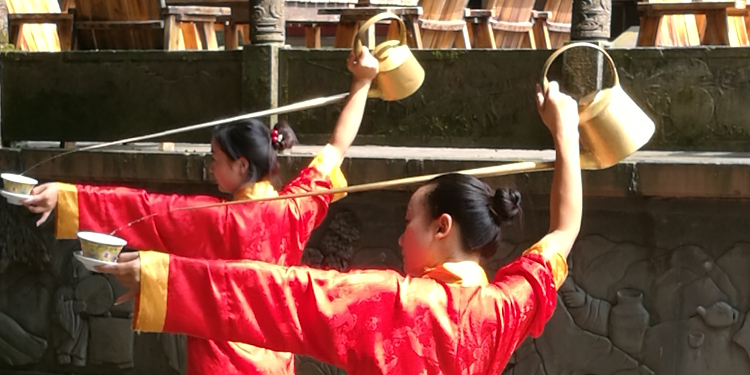 Long spout kettle ceremony is at the confluence of Chinese acrobatics and the art of tea. The video below, from the 2013 Spring Festival gala, shows a fine example.

This type of tea ceremony probably has its roots in the crowded teahouses, situated on the banks of Sichuan’s main rivers.

There, people would sit close to each other, on rows of long benches. The long-mouthed kettle (长嘴壶) would allow the waiters to walk between the rows and refill the customers’ gaiwans with hot water. Thanks to the kettle’s long mouth, it could do so without disturbing their conversations. Another benefit of this kind of kettle is that the hot water cools down along its trajectory. Therefore, when it touches the tea leaves in the gaiwan, it is at the appropriate temperature.

Over time, the performative aspect of the pouring and the skills of the waiters became more important.  Big teahouses in cultural centers like Chengdu started to have shows, where the waiters would demonstrate their kettle tricks. The handling of the long spout kettles became a central part of teahouses’ entertainment programs, together with Sichuan opera and mask changing.

At this stage, the length of the kettles’ mouths grew beyond their practical optimum. Kettles with mouths of a meter or so were used to demonstrate the dexterity of their handlers. Those manipulating the kettles became specialized performance artists, trained in the techniques of acrobatics, Sichuan opera, and martial arts. In the context of Sichuan teahouses, they are called tea masters. The kettles they use, are entirely made with copper. This gives them their distinctive golden glow.