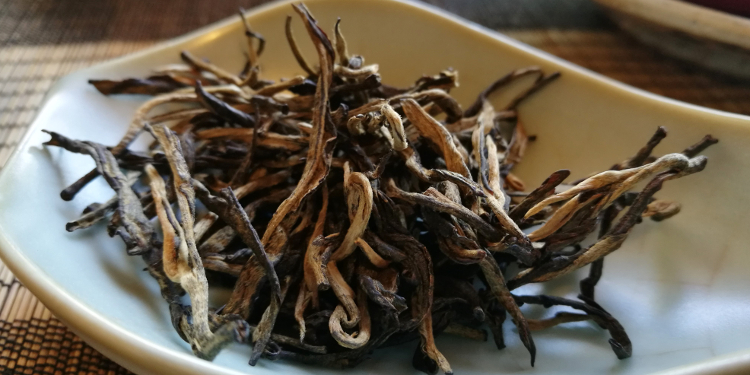 Dianhong (滇红) is a broad category that refers to all black tea from Yunnan Province. Dian (滇) is Yunnan’s other name, while hong (红) means red and stands for red tea. Because “black teas” are referred to as “red teas” in Chinese, Dianhong can be translated either as Yunnan black tea, or as Yunnan red tea.

Yunnan black tea is produced in most of the tea producing counties of  southern and western Yunnan. Menghai County and Fengqing County are two big production centres.

The production of black tea on a large scale in Yunnan dates back to the 1930s. The province’s ideal tea producing conditions were used for making black tea. At first, it that was mostly designed for export. It has now become one of China’s famous black teas.

The process for making Yunnan black tea was mostly borrowed from Qimen black tea. Its main production steps are the following:

A particularity of Yunnan black tea is, that it is made with tea plants from the big leaves varietal. They are the same plants used for making Pu’er Tea.  Depending on the grade of leaves used, the appearance will change a little bit. Jinzhen (金针) or “Golden Tips” is a type of Yunnan black tea only made with the thinnest tips. As indicated in its name, these are partially or completely golden. Dianhong made with leaves (not buds or tips) is darker, but will also show some golden colour.

The big leaves material is what gives black tea from Yunnan its unique flavour among all the different types of black tea. Its perfume is floral, while its taste is both sweet and fruity.

The image above shows some first rate Dianhong made with ancient tea trees.